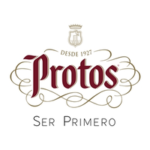 Protos, from the Greek word for "first", has the pride and privilege of being the first winery in Ribera del Duero. Founded in 1927 by eleven local vine growers the winery was called Bodega Ribera del Duero. From that point the winery took pride in their slogan "Ser Primero", or "to be first". Although the oldest winery in the Ribera, Protos continues to be an innovator in viticulture, vinification, and market development.

For example, the identification and isolation of their own indigenous yeasts allows Protos to improve the fermentation and ageing process and express unique aspects of Tinto Fino from different vineyards.

With 1,400 hectares of poor limestone and clay soils at 2,400 to 2,600 feet in altitude the old vines produce wines of stunning vibrancy and intensity.

In 1982 the Bodega granted the use of its original brand name "Bodega Ribera del Duero" for the founding of the new appellation.

The original cellars, still in use, are buried deep beneath the 1000 year old Penafiel Castle and are connected to the new winery built in 2007. This winery building, designed by Richard Rogers, is considered a XXI century modern masterpiece and is yet another indication that Protos, while deeply rooted in the history of the region, continues to be a forward thinking innovator.